Despite how very much overdue it is, I wanted to share a recap of this year’s CLOVES Conference. There hasn’t been a CLOVES Conference since I started this blog so I’ve never really had a chance to write about what these incredible gatherings are like. I think it’s so important to not only share how wonderful it is to connect with families all over the world affected by CLOVES, but also how outstanding it is how much information and how many new resources we get out of it. I mean, effective treatment was presented at this conference, a first step in the CLOVES community! But I’ll get to that soon, stay tuned.

This year’s CLOVES Conference took place on June 8th in Boston, MA. It was CLOVES’ fifth family conference ever, and some of the speakers included Rick Guidotti of Positive Exposure, Dr. Guillaume Canaud of Hôpital Necker-Enfants maladies, and Dr. Denise Adams of Boston Children’s Hospital. There were about 156 people in attendance including families from all over the world who came together to learn more about CLOVES and connect with other families.

My favorite part of these conferences is getting to meet other children, teens, and adults affected by CLOVES along with their families. It’s so special because living with a rare disease, we go a lot of our lives feeling like the only ones with our syndrome. In the beginning, that’s the way it felt because CLOVES wasn’t discovered yet. But now, though we know what we have and who else has it, it still can be isolating at times because those with CLOVES are so sparsely spread out among the world. I can only really interact with other CLOVES people online from my hometown in Pittsburgh because I don’t know many people in my area with CLOVES, let alone people my age. It’s one thing when you connect online (which is still awesome itself) but it’s another thing when you can actually meet other people and families in person, connect with them, and see how CLOVES impacts them. It’s wonderful to share advice, share experiences, and just get to know who everyone else is! That’s the foundation these conferences are built on.

The speakers at this conference just absolutely blew me away. Rick Guidotti of Positive Exposure shared his story as a photographer and his endeavor to show the beauty in every single human. He demonstrates how each individual person has a unique beauty in their own way and showcases these people he photographs. Many of those featured in his campaign are people diagnosed with a medical syndrome to show that everyone is beautiful regardless of what they’re diagnosed with. This hit home for those in the room because CLOVES can certainly get in the way of one’s self-esteem. I know it does for me. It’s tough to really “feel” beautiful when you have these overgrowths on your body from CLOVES.

But when it comes down to it, we are all human and we are all beautiful in our own unique way. A medical diagnosis, whether visible or invisible, shouldn’t get in the way of that. Rick is this kind, charismatic, fun photographer who makes you truly feel beautiful when he photographs you. We had the wonderful opportunity to be photographed by Rick at this conference and wow, I’ve never felt more confident in myself than when he was snapping pictures of me. He is so genuine about the way he tells you you’re beautiful that you start to really believe it too, without a doubt.

On top of that, Dr. Guillaume Canaud of Hôpital Necker-Enfants malades presented something groundbreaking to those at the conference. He presented on his effective treatment for CLOVES. Yes, you read that right. Effective. Treatment. Treatment that doesn’t just inhibit CLOVES symptoms but that actually decreases overgrowths and malformations! When Dr. Canaud was tasked with treating a patient with CLOVES so severe he was told he only had limited time left to live, Dr. Canaud discovered a specific PIK3CA (the gene mutation that causes CLOVES) inhibitor called BYL719 that vastly decreased the patient’s symptoms and saved his life. Since then, Dr. Canuad has had tons of other cases where he treated patients affected by CLOVES and other similar syndromes with this drug and effective results ensued. Overgrowths, vascular malformations, and other symptoms of CLOVES actually decreased in size while on this drug for a period of time. It’s absolutely magnificent. His work is being done in Paris, France, so it’s not yet widespread here in the U.S., but there are clinical trials available to try to start on BYL719 here in America. Some CLOVES patients have already been started on it.

This effective treatment brings a brand new hope for CLOVES patients and families. I think it’s safe to say that nearly everyone in the room was in tears at the end of this presentation…this is something that we never thought we would get to see. Even I was under the impression that there would never be an actually effective treatment that can decrease the effects of CLOVES. You can read more about Dr. Canaud and BYL719 here.

Dr. Adams has done so much for the advancement of CLOVES, explaining the treatment processes and medications available as well as deciphering the CLOVES gene mutation from other very similar syndromes. After understanding her explanation of how each genetic mutation requires a specific gene mutation inhibitor in order to act as effective treatment, I was able to better understand the genetic background of CLOVES. To understand what medication will work, you need to know what gene you have, and that’s where genetic testing is necessary. Dr. Adam’s advocacy for CLOVES and making treatment accessible for patients has been monumental in the progress of treating this disease. Without her and her work, we wouldn’t be as far as we are now in establishing drug trials here in the U.S. 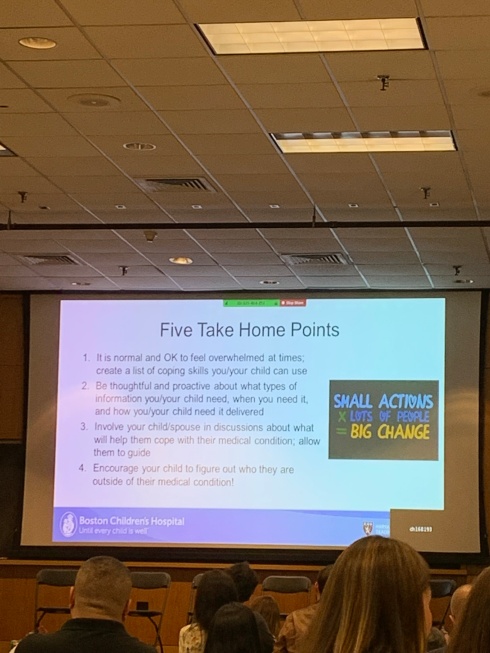 We also had the pleasure of seeing Dr. Lillian Hayes, a psychologist at Boston Children’s Hospital, talk about the emotional effects of CLOVES and how to cope with this syndrome. It was great to hear this side of the medical field because the emotional and mental impact is just as important as the medical ones. There were also opportunities to mingle with other families and purchase CLOVES merchandise for sale in support of CLOVES Community including bracelets, hats, the latest children’s book Four Leaf Clovers, and other items. Rick was kind enough to offer photoshoots to any families interested, and there were breakout groups with specific topics such as adults living with CLOVES, CLOVES medication and surgical treatment, newly diagnosed, day to day living with CLOVES, and talking to kids about CLOVES, all either led by other CLOVES parents or medical professionals. It’s great to partake in a small group session so people can engage in a dialogue where you know your questions will get answered.

What else stood out to me is that the medical professionals who all spoke at this conference didn’t just present and then leave, they all stuck around for the entire conference and even hung around after it ended to answer any questions families had for them. Their commitment to bettering the lives of CLOVES patients and families is so evident in not only the work they do but also in the way they interact with and treat their patients and families.

Though I’ve only been to 3 conferences, this one was by far the best. It just gets better and better each year with the more families that are connected and the more resources that surface. One day of this did not feel like enough, but it was a wonderful day filled with great experiences and new information. This conference was incredibly well put together, and the Board of Directors of CLOVES Syndrome Community is who to thank for that, with an extra special thanks to the Executive Director Kristen Davis! We are really blessed with some wonderful people in the CLOVES Syndrome Community. Here’s to the next one!